One of the larger marketing “misses” of 2017 was the Fyre Festival. After the island dust had settled, the scrutiny of who and what went wrong from media outlets and analysts began in earnest. Sadly, many of the post-festival articles placed partial blame on the shoulders of influencers who were paid to promote the event. Well here’s a fiery news flash… 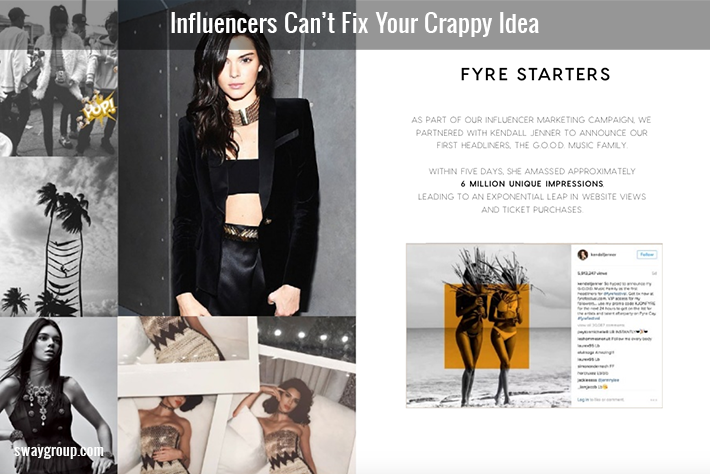 They also can’t sell your junky product or drive downloads of your useless app. A bad idea equals bad results. Period. Big influencers are only as influential as the product or service will allow.

Influencer marketing when done well can be a tremendous tool added to any marketing arsenal. But as the old adage goes, “you can lead a horse to water but you can’t make it drink.” Influencers can only get you so far. Brands must be able to deliver on the promise and expectations they ask influencers to create in the first place.

Normally, it would go without saying that foundational concepts (such as a content marketing strategy in Fyre’s case), should be in place before the powerhouse that is the influencer community is tapped. Unfortunately for Fyre, the same platforms that built them up, dropped them down…way down.

Fyre’s lack of execution fueled a brush fire of mockery and bad press, attracting, even more, attention in the direction of their plume of festival smoke. This had nothing to do with their influencers. When you hire the right influencers to promote a great product, the results can be powerful.

Putting out the Fire

If you’re selling something of value, influencers can definitely help move the needle – but the content needs to be strategic (not an orange box à la Fyre). Influencers need to be chosen strategically because reach and influence are two very different animals, especially when it comes to driving action.

Reach is great when the goal is general awareness. But if your goal is clicks, purchase, or any other action, you need influence, and someone with millions of followers doesn’t necessarily have that.

The Closer to the Sun, the Deeper the Burn

Post-festival analysts can point fingers all they want at influencers, or even at their lack of properly calling out their sponsored posts (which is illegal and ethically not ok), but at the end of the day, brands need to remember that generating clicks and actions is only half the battle.

There needs to be a solid idea, product, or service that the influencer is getting behind, and influencers need to be all in on supporting it. Otherwise, brands are wasting money on inauthentic content. By combining flawless execution of your idea with the right storyteller, you can generate greater brand awareness, drive action and powerful engagement. All while strengthening true connections with your consumers.

Interested in pairing your brand with the right kind of influencers to drive authentic connections with consumers? We can help.