Why Google’s New ‘nofollow’ Change Is Good News For Brands

Here’s a bit of news that brands and influencers may be interested in: Google just announced that the nofollow link attribute (i.e. rel=”nofollow“) will be seen as a “hint” rather than as a specific instruction for ranking purposes. Also, Google is adding two additional link attributes, “sponsored” and “ugc.” 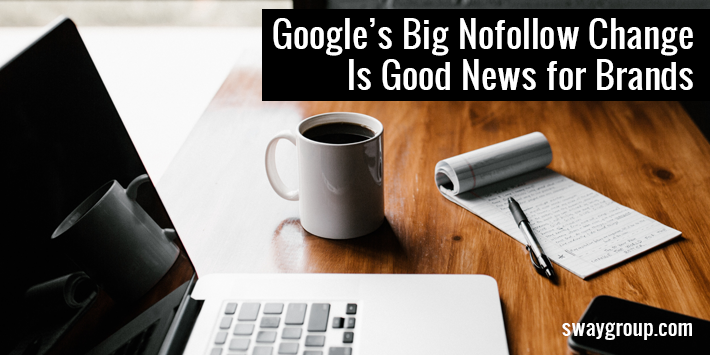 Oh, you may be saying, how very fascinating! Except not a single word of that made any sense! If you don’t spend your days delving through SEO-related technical jargon, we put together a rundown of what Google’s “nofollow” change means:

There’s no need to change any nofollow links that already exist: according to Google, they recommend switching over to the sponsored attribute “if or when it is convenient.”

As Google puts it,

Links contain valuable information that can help us improve search, such as how the words within links describe content they point at. Looking at all the links we encounter can also help us better understand unnatural linking patterns. By shifting to a hint model, we no longer lose this important information, while still allowing site owners to indicate that some links shouldn’t be given the weight of a first-party endorsement.

Still clear as mud? In a nutshell, influencers who correctly use the newly-added “sponsored” attribute will better position branded content for Google’s search rankings, as Google continues to evolve how they index web content. Correctly-attributed links will help Google to further identify what the site is about and how/where to rank it in search. And that is all good news for brands.

Have any questions? We’d love to chat!