More than 500 major corporations have paused their advertising on Facebook and Instagram in the United States as part of the #StopHateForProfit campaign, including familiar brands like LEGO, Dunkin Donuts, Starbucks, Target, Best Buy, Ford, Adidas, and many more. The Facebook ad boycott asks participants to stop using Facebook’s advertising services during the month of July, in order to persuade the social media giant into increasing efforts to stop the spread of racist, violent and verifiably false content. 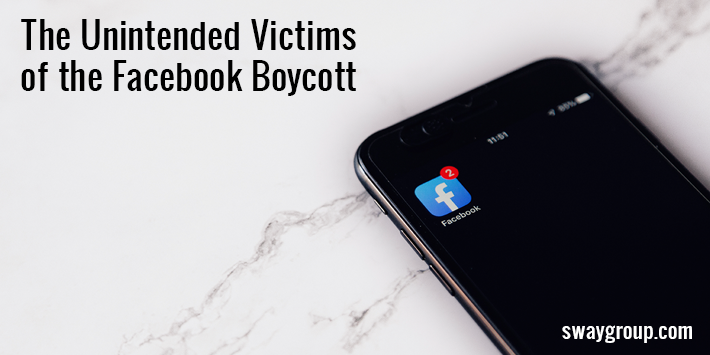 By stopping advertising, brands are sending a powerful message to the social media giant. Ad sales are the primary source of Facebook’s revenue, and Verizon alone spent nearly $1.5 million on Facebook and nearly $500,000 on Instagram during the period between May 22nd and June 20th, 2020.

At our influencer marketing agency, we are in full support of this movement. We absolutely agree with the campaign statement that profits will never be worth promoting hate, bigotry, racism, antisemitism and violence.

However, the boycott needs to be focused on the financial pressure caused by halting advertising dollars — rather than the potentially devastating effects of putting influencer content programs on pause.

As the advertiser boycott gains momentum, brands need to remember that the platform is the target, rather than its users and participants.

While users can obviously choose to join the boycott to send a message about Facebook’s need to better police hate speech and disinformation, influencers are small business owners, many of whom have taken tremendous losses this year from COVID-19. The ad boycott should be felt by Facebook itself, not the influencers who rely on Facebook and Instagram to reach their audiences.

Eliminating sponsored posts from Facebook and Instagram hurts influencers, rather than making any kind of dent in the $69.7 billion ad revenue Facebook made last year through its millions of advertisers.Influencers have already had to adjust to getting limited views with paid boosting on hold from brand partners, and losing campaigns altogether could be devastating for many.

The Challenge to Earn a Paycheck

Over the years influencers have been jumping through hoops in order to keep up with shifting monetization opportunities from Facebook and Instagram, from staying current with complicated feed algorithm changes to achieving the 10K follower minimum for Instagram’s Swipe Up feature.

Ever-changing terms and conditions have affected influencers as well, with influencers held to a much more stringent disclosure requirement from the FTC than brands who participate in product placement activities. (When was the last time you saw a “this is an ad” announcement in a movie scene with a prominently-featured soda or vehicle brand?)

As a whole, influencers already face an uphill battle with earning fair compensation for their ability to engage targeted audiences on brands’ behalf. While some extremely high-profile influencers have been criticized (fairly, in our opinion) for their exorbitant per-post fees, the vast majority of content creators charge a fair price for their professional services.

For influencers whose livelihood centers around their ability to connect with other social platform users, losing sponsorships unfairly puts them in the crosshairs of a fight they never started in the first place.

Platform Sponsorships Are Different From Ads

Sponsoring influencer content compensates the creator, either directly or through the broader services of an influencer marketing agency. Ads are often used in tandem with a sponsorship in order to provide targeted boosting for like-minded audiences, but this type of paid amplification can be put on hold without halting the effectiveness of the influencer program itself.

Influencer marketing works because it doesn’t feel like an ad: when done correctly, sponsored influencer content feels like a natural extension of their usual topic and tone. Companies can continue in their efforts to send Facebook a strong message that it’s time to clean house on hate speech and disinformation — without punishing influencers for their unparalleled ability to reach specific demographics with branded content that resonates.

The Message That Matters

Ultimately, Facebook needs to hear that the businesses who make their ad revenue possible are calling for change. While users have been speaking up for years about the spread of misinformation and hate speech, advertisers are the ones who likely have the best chance at driving policy change by affecting Facebook’s bottom line.

Not that Facebook is rolling over quite yet. As Carolyn Everson, vice-president of Facebook’s global business group told the Wall Street Journal, “We do not make policy changes tied to revenue pressure. We set our policies based on principles rather than business interests.”

While it remains to be seen what will happen as a result of this growing brand movement, we are encouraged by the corporate actions we’re seeing.  At our agency, we hope Facebook will listen to what companies are telling them, and put in stronger and more transparent efforts to make their social platforms a healthier environment for the millions who use them.

To learn more about how Sway Group can help your brand reach the right audiences with digital content creators, contact us today.

[This article was originally published on The Drum and has since been updated.]