Twitter parties are a great way to engage with your audience in real-time and reach potentially millions of consumers in less than an hour. We are sharing how to host a Twitter party and some tips that will help to make your Twitter party successful. 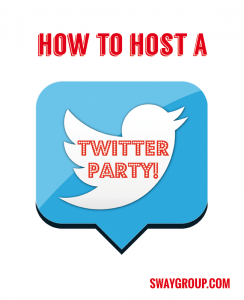 Everything You Need to Know to Host a Twitter Party

A Twitter party is a real-time conversation on Twitter that brings together a lot of people talking about a specific topic. A hashtag is used to participate and track to the conversation. Twitter parties (sometimes called Twitter chats) typically last between 30-60 minutes and sweepstakes prizing is usually included in the event.

Twitter parties are run by a host who will ask 4-6 questions during the party, giving participants a few minutes in between each to answer the questions and discuss with other participants. The questions can be structured to drive general discussion around the topic, build excitement for the brand, or gather consumer feedback.

In addition to the questions, the host will also share key messaging throughout the party and interact with the participants through replies and retweets. Participants will often retweet the host, amplifying the reach of the party and bringing their followers into the conversation.

You can sponsor a Twitter party on behalf of your brand to announce a service, launch a product, or promote awareness of an existing product or charity initiative. Twitter parties can also be used as live viewing parties, with participants talking about a show or movie as they watch it together.

Twitter users are excited to join in the fast paced conversations, share their opinions as they answer questions, and have the chance to win a prize.

While Twitter is often thought of as a platform to share news or reach out to brands with customer service complaints, there is a very active Twitter population who are excited to connect with both people and brands on the platform. These users participate in conversations on Twitter and are a great audience for a sponsored Twitter party.

If your target audience is on Twitter, a Twitter party can be a great way to connect with them and drive excitement and conversation.

1. Pick a Topic and Hashtag

This is one of the most important steps. Be sure to pick a specific topic that can be discussed for up to an hour. It should be related to your brand/industry. For instance, a budget hotel chain could pick traveling on a budget. In order to find the tweets during the party and follow the conversation, everyone needs to include the same hashtag in their tweets. Pick something short and obvious for your Twitter party hashtag. You don’t want to use up too many characters or choose an uncommon acronym. Ideally, people will know what the party is about by looking at the hashtag. Also, before you finalize your hashtag, do a search and ensure no other brands are using it.

You can compensate selected influencers to participate or even host or co-host the party. Including influential content creators is helpful to help increase the reach of your Twitter party, no matter how large your brand’s presence is on Twitter. Select influencers with an engaged audience that matches your target demographic. They can help you promote the party and their audiences will also see the tweets. It is likely that members of their audience will join in the conversation, helping to spread your campaign messages exponentially throughout the network.

Promote the party via your social media networks, email newsletter, etc. Make sure to include the time, topic, and hashtag, plus any other reasons someone would want to participate (such as a giveaway). If you’re working with influencers, be sure to ask them to promote it and outline when and how they should do so.

Create a script ahead of time, with a list of questions and other tweets that will go out at specific times. Write questions that require more than a “yes” or “no” answer to encourage discussion, and make sure they aren’t purely about your product. Schedule these to automatically post ahead of time.

5. Engage During the Party

Twitter parties move FAST. Participants will be prepared for this, but you need to make sure you are prepared, too. This is why it’s so important to have a script and schedule all of the main tweets before the party starts. This strategy will allow you to focus on engagement during the party. You should answer questions, retweet the best answers, and respond to various participants. And don’t forget to also interact and retweet your influencer co-hosts! It can help to have multiple members of your team working together during the party to make it a success.

We suggest attending a couple of Twitter parties before hosting one yourself. It can help to see the flow of the event before you create a Twitter party script, and will give you an idea just how quickly the conversations moves.

To join in a Twitter party, log into Twitter and search for the hashtag. Make sure you are viewing latest tweets and refresh the page frequently. The host will tweet out any rules at the beginning of the party, and some hosts do ask that you RSVP. Generally, you can jump right in by answering the questions and including the hashtag.

Let’s Make Your Next Influencer Marketing Campaign a Success:

If you’re interested in hosting Twitter parties, learn more about how we can help you. Sway Group has hosted dozens of successful Twitter parties, causing our topics to trend nationally and reach millions of users. Contact us to help enhance your marketing with a twitter-based influencer marketing campaign.